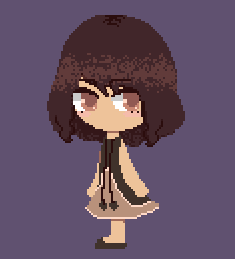 Here’s Cinnamon! What do you think about this cutie? ^^ 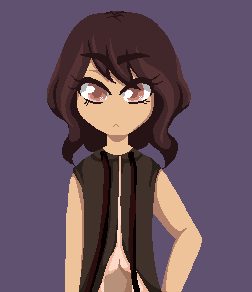 For now I’m really slow with a progress, because of all the exams that I have, but still - I want to finish this game until the end of june! *n* Only one mini game guys!

So when I finish it, i will probably make a post about looking for some testers, I hope that I will find here someone interested in it ^^!

Thanks for keeping up with Dream of Gluttony everyone! <3

Get Dream of gluttony

Take a walk in a cute Food Town, make some friends and play with them! Only if you aren't human of course...

Your Beloved Issy2 years ago

Hey, so I finished the game, and I feel I should provide some much-needed critique regarding Cinnamon

Basically, I don't think the bits involving Cinnamon's gender was handled too well, and here's why:
I'm a trans woman myself, and I wanted to make this point clear: about 99% of us would not tolerate anyone misgendering us, even if they happen to be close friends. It's just a really low blow. It's like if you were spiteful of someone in a wheelchair and so you kept calling them a cripple, it's just... it's really not cool
The fact that Cinnamon is okay with Dumpling calling them a guy doesn't really make it better, either. At best, it makes it sound like trans women don't actually believe they're women, and at worst, it promotes the idea that we're only crossdressers that are out to trick men into relationships or sometimes even sex

I've seen some of your comments on Manly's videos, and I don't believe you wrote Cinnamon this way out of malice. I don't think you had any bad intentions, and the fact that you're willing to make your games inclusive for us makes you much better than a lot of other creators
I just think you could've done it with a lot more grace and sensitivity, you know? It's a good idea to let people know where your intentions are with things like that. I suggest doing more research in the future, and maybe getting some input from trans people if you can.
If I were to suggest alternative options for Cinnamon in particular, I would say either to make Dumpling acknowledge Cinnamon as a woman and just stick with being irritated with their teasing, have Cinnamon keep their gender entirely a secret, or make them non-binary/bigender. If, they would accept being called a guy and it would still be respectful.

I do hope you'll take this into consideration, and I look forward to your future projects. You have good ideas, and I want to see you succeed!

P.S. I'm also one of the people who drew Sissy for you in Artfight last year!

Yes, I know that I messed up that part. I think that I will rewrite it in the future, to make it more clear what was my intention. I'm really happy you shared your ideas, I think that being non-binary would suit Cinnamon the best, so I will probably rewrite it in that way. I'll try to make more research and ask more people for the opinion before publishing it, so I hope it will turn out okay!

Ah, and I remember your drawing, it was super cute <3!

I don't hate him but I like dumpling and when he said they were couples, my reaction was "Cinnamon... dumpling? Oh wait no, the bun's names cinnamon bun..." lol, I'm stupid.